Information on The Courage to Remember poster series

"Behold the tears of the oppressed. and they have no one to comfort them! On the side of their oppressors there was power... And l thought the dead more fortunate than the living; but better than both is he who has not Yet been, and has not seen the evil deeds that are done under the sun."   -Ecclesiastes 4:13

Six million Jews and millions of others, including Roma, Slavs, political dissenters, LGBTQ+ folx, POW’s, and people with mental or physical disabilities were murdered by the Nazis between 1933 and 1945. The Nazi policy of racial hatred moved with relentless cruelty from hateful propaganda to mass murder, culminating in the extermination of European Jewry and culture.

The magnitude of brutality, the remorseless cruelty, and the cold industrial character of mass murder during the Holocaust are unique. However, the root causes of the Holocaust persist. Racial hatred, economic crises, human psychological and moral flaws, the complacency or complicity of ordinary individuals in the persecution of their neighbors are still ominously common.

Thus we must have the courage to remember and study the Holocaust, no matter how disturbing these studies and memories may be. For only informed, understanding, and morally committed individuals can prevent such persecution from happening again. The persecution of people is always and everywhere intolerable and to act against it is a beginning for hope. 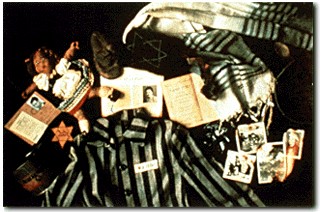 Why the Jews? The Patterns of Persecution

"Moreover, we do not know to this day which devil has brought them (Jews) here...like a plague, pestilence, pure misfortune in our country." Martin Luther, About the Jews and Their Lies, 1543

Jewish communities existed continuously in Europe for over 2,000 years. Many of these communities were older than the countries in which they existed. Nevertheless, as the countries of Europe developed, Jews were rarely given complete citizenship status. At best they were tolerated as guests. Their social and religious distinctiveness made them persistent targets for persecution; and such persecution, in turn, intensified the cohesiveness of Jewish communities.

The emergence of Christianity as the ominant religion in Europe intensified the persecution of Jews. Since both the religious and political life of Europe became organized around the Christian faith, Jews were seen as outcasts, the deniers and "killers" of Christ. For millions of European Christians, for over 1600 years, the hatred and persecution of Jews was religiously sanctioned. antisemitism intensified during the l9th and 20th century industrialization of Europe as Jews participated more directly in European economic and social life.

By 1933, the patterns of economic, social, and personal persecution of uropean Jews were well established. Nazi racial antisemitism and propaganda amplified and manipulated these patterns, ultimately adding one deadly tenet--that all Jews must be eliminated.

Passports of all Jews in Nazi Germany were stamped with the letter "J" for "Jude." German Jews were forced to take new middle names: Israel for men, Sarah for women.

1933: German Jewish Life Before the Nazis

"So I believe that I act in the spirit of the Almighty God: by defending myself against the Jew. I am fighting for the work of the Lord." Adolf Hitler, Mein Kampf. 1924

The Nightmare Begins: Hitler and the Nazis

"My measures will not be hindered by any legal considerations or bureaucracy whatsoever. It is not justice that I have to carry out but annihilation and extermination." Hermann Goering, March 3, 1933

As the international economic crisis of the Great Depression spread in the early 1930s, the Nazis fed on the discontent of the lower and middle classes of Germany. In 1932, the German people who voted for the Nazis hoped for decisive leadership, economic revival, and a new national sense of pride and purpose. Most assumed Nazi extremism would be tempered by the responsibility and compromise necessary to govern. They were mistaken.

Immediately upon seizing power, the Nazis unleashed a frenzy of violence against their political opponents, many of whom were Jews. On April 1, 1933, a nationwide boycott of Jewish businesses was organized by the SA (Storm Troops) and SS (Elite Guard), who picketed Jewish-owned shops and businesses.

An SA man stands guard outside a Jewish shop during the Boycott of April l, 1933. CL:National Archives and Records Administration. Wash.. D.C. (NARA)

"All Jews' businesses are closed. SA men are posted outside their entrances. The public has everywhere proclaimed its solidarity. The discipline is exemplary...The boycott is a great moral victory for Germany." Josef Goebbels, Diary. April 1, 1933

Kristallnacht: The Night of Broken Glass

Flight Without Escape: The Jewish Homeless

At the core of the Nazi ideology was a deadly vision of a racially pure society: a vicious form of social, genetic, and population planning that eliminated every individual not fitting its narrow definition of perfection. While Jews were the primary target, Gypsies, Slavs, homosexuals, the handicapped and political dissidents were also trapped in the deadly grip of Nazi ideology.

The Nazis believed that the "useless mouths" (the chronically ill and the physically and mentally defective) had no right to live. On September 1, 1939, Hitler signed an order "granting" such individuals the right to die. The so-called euthanasia (mercy-killing) program of the Nazis killed hundreds of thousands of individuals by gas or lethal injection.

In 1940-41 special liquidation centers were established throughout Germany to eliminate the mentally or chronically ill. In these centers the first hermetically sealed gas chambers were developed. These deadly chambers, disguised as showers, were the prototypes for the mass extermination chambers later used in the Nazi extermination camps.

Over 500,000 Gypsies were systematically murdered by the Nazis between 1939 and 1945. Like the Jews, Gypsies were stereotyped in Nazi propaganda as vagabonds, criminals, and parasite

Gypsies being deported from Simmering in Vienna to the transit camp of Bruck on the Leitha River, late 1938.CL:DOW